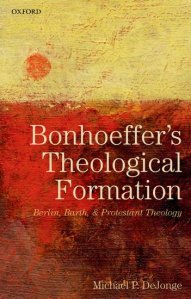 There is clearly  no shortage of writings on Bonhoeffer and his thinking. Another volume of the 16-volume Dietrich Bonhoeffer Works was just released a few weeks ago. In 2012 Bonhoeffer was the focus of the Wheaton Theology Conference (video can be found here; published essays can be found here), and a basic search on Amazon reveals a growing number of monographs, collection of essays, a new forthcoming reader and even a new biography. In contrast, books on the relationship between Bonhoeffer and Barth have been limited. One of the few is Pangritz’s Karl Barth in der Theologie Deitrich Bonhoeffers: eine notwendige Klarstellung (ALektor Verlag, 1989), later translated into English in an expanded and revised edition as Karl Barth in the Theology of Dietrich Bonhoeffer (Eerdmans, 2000). Puffer’s forthcoming essay is also available online. All of this makes DeJonge’s volume a welcome addition. This book may have begun as a dissertation at Emory with David Pacini, but DeJonge’s book reads like a work of a seasoned scholar. He maintains his own voice without relying so heavily on the research to speak for him (a normal temptation in dissertations) and his writing is clear and helpful to the reader. DeJonge certainly has a gift for bringing clarity to complex concepts and texts. Onto the book.

DeJonge’s concern is that much of the Bonhoeffer scholarship focuses on his later works and therefore underestimates his earlier material.  There is truth and wisdom in attending to a theologian’s mature work, but isn’t it possible that their early work is foundational for their most mature writings? In this vein DeJonge gives careful attention to Bonhoeffer’s Act and Being (1930) where  Bonhoeffer engages in a critical assessment of the two theological movements: Lutheran theology (represented by his Berlin-teacher Karl Holl) and Reformed dialectical theology (represented by Karl Barth). Although Bonhoeffer has appreciation for both, his own proposal moves beyond them and towards a person-concept of revelation.

Chapter one highlights Bonhoeffer’s break from the traditions of his teachers and sets up the contrasts between act and being concepts of revelation. Being-concepts tie revelation to objects of knowledge (e.g., the Bible) or knowing (e.g., consciousness) and therefore places revelation in the power of the human mind and away from God’s transcendence. Barth, on the other hand, sees this problems and aims to uphold God’s transcendence and makes revelation contingent. Bonhoeffer agrees at this point, but finds Barth’s overall solution unsatisfactory. Barth’s act-concept is so oriented toward transcendence that it proves difficult to make sense of God’s revelation in history, especially in Christ. Bonhoeffer’s solution is a person-concept of revelation, or a person-theology. Avoiding the privileging of act, transcendence, and the Word or being, history, and the world, Bonhoeffer’s person-theology provides a third concept oriented to both Word and world, incorporating both act and being, but doing so in the person of Jesus Christ.

Chapter two provides a more detailed account of the problem of act and being. The terms do not refer to things themselves (thus, act does not refer to an act), but to the features of such things. More specifically, “act means the discontinuous, contingent, and structurally open; being means the continuous, the possible, and the structurally closed” (17). This chapter also traces Bonhoeffer’s critique of act and being in concepts in Part A of Act and Being, a section that deals with Kant and post-Kantian philosophy. This makes for a dense discussion, but the point is that the problem of act and being must be solved theologically and not by philosophy. Philosophy may offer theology conceptual resources, but it “thinks from the self rather than from revelation” (32). For Bonhoeffer “[a] theologically acceptable unity of act and being begins with the concept of revelation” (34), and this revelation is not act, but person.

Barth’s act-theology forms the content of chapter three. This chapter consists of DeJonge’s explanation of Barth which “overlaps with and in some ways departs from Bonhoeffer’s account” (39). In keeping with the focus on Bonhoeffer’s early theology, DeJonge focuses on Barth’s Göttingen Dogmatics and other earlier works to demonstrate the role Barth’s early theology played in challenging Bonhoeffer. In short, Barth argues that only Reformed thinking (i.e., act-theology) can adequately deal with the problem of transcendence as found in Feuerbach. Barth’s dialectical and synthetic thinking (he sees parts – God and humanity – coming together in the whole act, Jesus) whereas Bonhoeffer’s is hermeneutical. Not in the sense of a theory of interpretation, but as in treating the whole (Jesus) as prior to the parts (God and humanity). (Another key difference noted by DeJonge is that Barth upholds a Reformed view of the person of Christ as the second person of the Trinity; Bonhoeffer maintains a Lutheran position where the person of Christ is the historical God-man).

Chapter four draws out the details of Bonhoeffer’s critique of Barth, namely that revelation cannot be the act of an eternal subject. Bonhoeffer’s alternative argues that revelation is the act and being of the historical person of Jesus Christ. The category of “person” brings together act and being in ways that Barth, Holl, and others never accomplished. This brings together Word and world, God and humanity, transcendence and history, all in the person of Christ. Chapter five helps clarify how this works by outlining how Bonhoeffer’s person-theology is an interpretation of the Lutheran tradition that stands in contrast to a Reformed position.

Even if Bonhoeffer understood his position as an alternative to act and being theologies, was he actually correct? Chapter six evaluates Bonhoeffer’s position and, contrary to other scholarly interpretations (esp Marsh and Tietz), sees Bonhoeffer’s account as “accurate enough” to be a genuine alternative. “Bonhoeffer, despite his occasional misleading of Barth, has put his finger, however clumsily, on the question that points to the decisive difference between his theological and Barth’s. How ought theology to think of both act and being? Under what contingent concept of revelation should theology unite act and being?” (112–13). Chapter seven helps answer this question in detail by presenting the Lutheran person-theology that constitutes Bonhoeffer’s alternative to Barth. DeJonge also shows how Bonhoeffer redefines the essence of Lutheranism in contrast to Holl’s theology of conscience. “The decisive point at which Bonhoeffer breaks from Holl is his insistence that God meets and justifies humanity not in the reflecting conscience but in the direct apprehension of the person of Christ present in the church” (127).

The enduring character of Bonhoeffer’s more mature ethical theology is the focus of the eighth and final chapter. DeJonge makes the case that this early academic period was crucial for Bonhoeffer’s overall thinking. “Bonhoeffer is not known today as a professor or academic theologian but rather as a pastor, resistor, martyr, or saint. He is not known for opaque academic treatises . . . but rather for his explorations of the Christian life” (130). His academic time appears to be “minor” and “insignificant.” Instead, DeJonge argues that “the person-theology Bonhoeffer developed in his early thought continued to sustain him throughout his life” (130). He may no longer use the same terms and form of argumentation, but DeJonge locates his person-theology and polemical thinking towards a split of act and being in Discipleship (1937) and Ethics (1940–43) and therefore finds great continuity. This is different from those who have tended to begin with Letters and Papers from Prison and/or Ethics and work backwards, often finding discontinuity. Instead, “Bonhoeffer established a pattern of thinking that serves him throughout his career” (146).

The limitation of this book is fairly obvious. Chapter eight begins to draw Bonhoeffer’s early person-theology into relation with his more mature works, but there is much more work that needs to be done in order to see how influential this concept of revelation was in the remainder of his thought. (I see this point as more related the limitation of a dissertation than a genuine criticism of the book). I’m also curious how Bonhoeffer’s early critiques of Barth as a dialectical theologian would be received by Barth scholars. Even for those who accept McCormack’s thesis that Barth remained dialectical, it seems that Barth’s theology developed as early as II/2 or even IV/1 in ways that would eliminate Bonhoeffer’s criticisms or at least soften them. Then again, this is the very point DeJonge seeks to argue against in chapter six. But these points are minor. Despite being an expensive book on a short period of Bonhoeffer’s life, I hope this work is read widely and that it furthers dialogue related to Bonhoeffer and Barth, their Christology, concepts of revelation, and their relationship to Lutheran and Reformed confessional backgrounds.

Many thanks to Michael P. DeJonge and Oxford UP for the review copy.